In the year of covid-fear all the hairs on my head turned shock-white ... #poem

Is March 1 a special day? Do we prank each other? In Arts class do we begin construction of a 15-day calendar to note the advent of the Ides of March. Any day, every day, anyone can be betrayed, being the theme?

The antidote to betrayal is to keep your expectations low. Don't convince yourself that today is the day your lottery ticket rings a bell. Don't assume that today, today, your luck is amping up and you will meet a gorgeous kind generous fertile not-fertile mate of any persuasion. The earth keeps moving. Most often, when you smile at someone they will not report you to the police. Somewhere, some child is happy.

Back to me. I showed up here to wish everyone a day of hope. Yeah, hope can be a killer of tender dreams, but we need it. This weirdo, me, is less tuned into hope, a future fantasy - not to be turned away but the now. The now. Whatever they're doing the clouds are astounding in their visual brilliance. Clear skies. Atmospheric struggles between pollution and clean air aside, there are pigeons. Always there are pigeons, plump and strutting, at least here in N.Y.C. If pigeons have earned an attitude of superiority and desire to parade their chubby selves, so can I. (I don't know why that's true. Let's pretend it is.)

I had a poem published in February, one I shall herein, here and now, share with you. It's about a painful swath of my life. About hope and persistence. Pulling away from pain. Moving on. One friend called it a "hair poem." Okay. Not really. Whatever you want.

In the year of covid-fear all the hairs on my head turned shock-white, all white, only white."

Read "Shock-White" on the gorgeous and historical site, Big City Lit. I love the editors - Alyssa Yankwitt, Christopher Cappeluti, Barry Wallenstein, Richard Levine - who took over from Nick (Nicholas Johnson), who I loved also. Everyone loved.

Everyone loves. Yes, we can all love. Don't have to admit it. Just enjoy. We're all forgiven every day.

Posted by Sarah Sarai at 2:16 PM No comments:

For the Children of Poets #poem by G.E. Schwartz

For the Children of Poets

Children of poets, how do you find Your haven? Maybe you escape to

A cousin’s or some other place? If There are two homes, off and on,

Separately (the parents’), would you Be directed by where you have little

But private stress to cope with? (With Her mother away, Deborah Milton

Had to be used, by ear and by pen Especially, at her alternate home.

Imagine, in the dark deeps of night, The blind poet, her father, haplessly

Anymore, and at four-thirty a. m., The hired secretary ill, unavailable!)

You heard, and wrote: a process by-Passing mind, or heart, I’d guess. Did

Sister Mary, too, have to learn Hebrew, Latin, other languages, he wanted

Read aloud? Children of dust, the call Can come at harsh hours, disrupting

The sleep of nature. The voice must Be heeded, the unfathomable words

Forming at best a promise that, in Some way, someday, everything will

Come into clarity. Warm-hearted Samuel Johnson must have been so

Exasperated on your behalf, saying That you had ben schooled only in

Alphabets and sounds of all those Languages, not in the words, their

Meanings that might have made all The long hours a little less wearisome.

Children, sleep well while all time Runs on. Rise, docile, dim of spirit.

Someday someone sometime will bless you for it.

Climate Change and Your Nerves

Climate Change and Your Nerves

Last Tuesday my weekly talk group - all of us senior and queer - hit the subject of feeling anxious about climate change - are we?/aren't we? anxious. And our guilt and fear, right-now fear and right-now guilt related to climate change and its inevitable impact on that thing ahead of us: The Future. Did we stop it? No. Many of us, to some degree or another, tried, ie, recycled and sometimes boycotted. If you have tried to mollify the planet or if you haven't, it's coming. We agreed we had the anxiety and probably each of us thought more about the messed up Earth awaiting us. The messed up Earth here and now. That giant iceberg that's about to break free. Birds. Always birds. Often cats, too.

So I was relieved to read a very relevant article by reporter Ellen Barry in the New York Times (monthly subscription costs $4!). Here's the first few paras from Climate Change Enters the Therapy Room.

PORTLAND, Ore. — It would hit Alina Black in the snack aisle at Trader Joe’s, a wave of guilt and shame that made her skin crawl.

Something as simple as nuts. They came wrapped in plastic, often in layers of it, that she imagined leaving her house and traveling to a landfill, where it would remain through her lifetime and the lifetime of her children.

She longed, really longed, to make less of a mark on the earth. But she had also had a baby in diapers, and a full-time job, and a 5-year-old who wanted snacks. At the age of 37, these conflicting forces were slowly closing on her, like a set of jaws.

In the early-morning hours, after nursing the baby, she would slip down a rabbit hole, scrolling through news reports of droughts, fires, mass extinction. Then she would stare into the dark. con't.

Yeah. The thought of mass extinction will do that to you.

I would expect that only the captains of industry who push denial like it's soft serve ice cream consider climate change it's a momentary blip. Or believe their fortresses will protect them. Which they won't. God could but God never seems to step in until ten million or sixty million people have been slaughtered. And even then... Anyone's guess. So I recommend you read the article. Here's a little more to bide you over:

It was for this reason that, around six months ago, she searched “climate anxiety” and pulled up the name of Thomas J. Doherty, a Portland psychologist who specializes in climate.

A decade ago, Dr. Doherty and a colleague, Susan Clayton, a professor of psychology at the College of Wooster, published a paper proposing a new idea. They argued that climate change would have a powerful psychological impact — not just on the people bearing the brunt of it, but on people following it through news and research. At the time, the notion was seen as speculative.

That skepticism is fading. Eco-anxiety, a concept introduced by young activists, has entered a mainstream vocabulary. And professional organizations are hurrying to catch up, exploring approaches to treating anxiety that is both existential and, many would argue, rational.

Again, from the Times.

Posted by Sarah Sarai at 2:34 PM No comments: 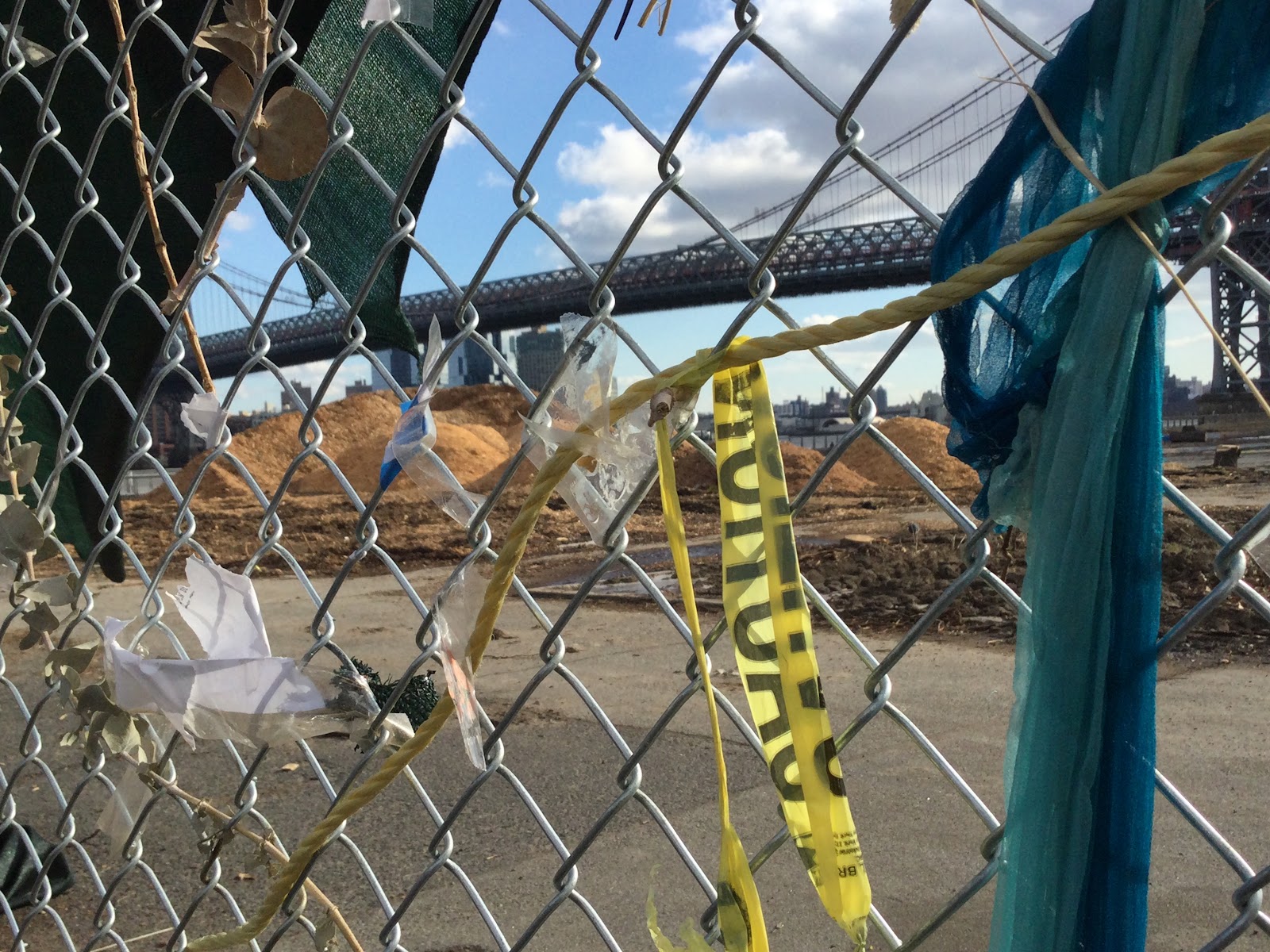 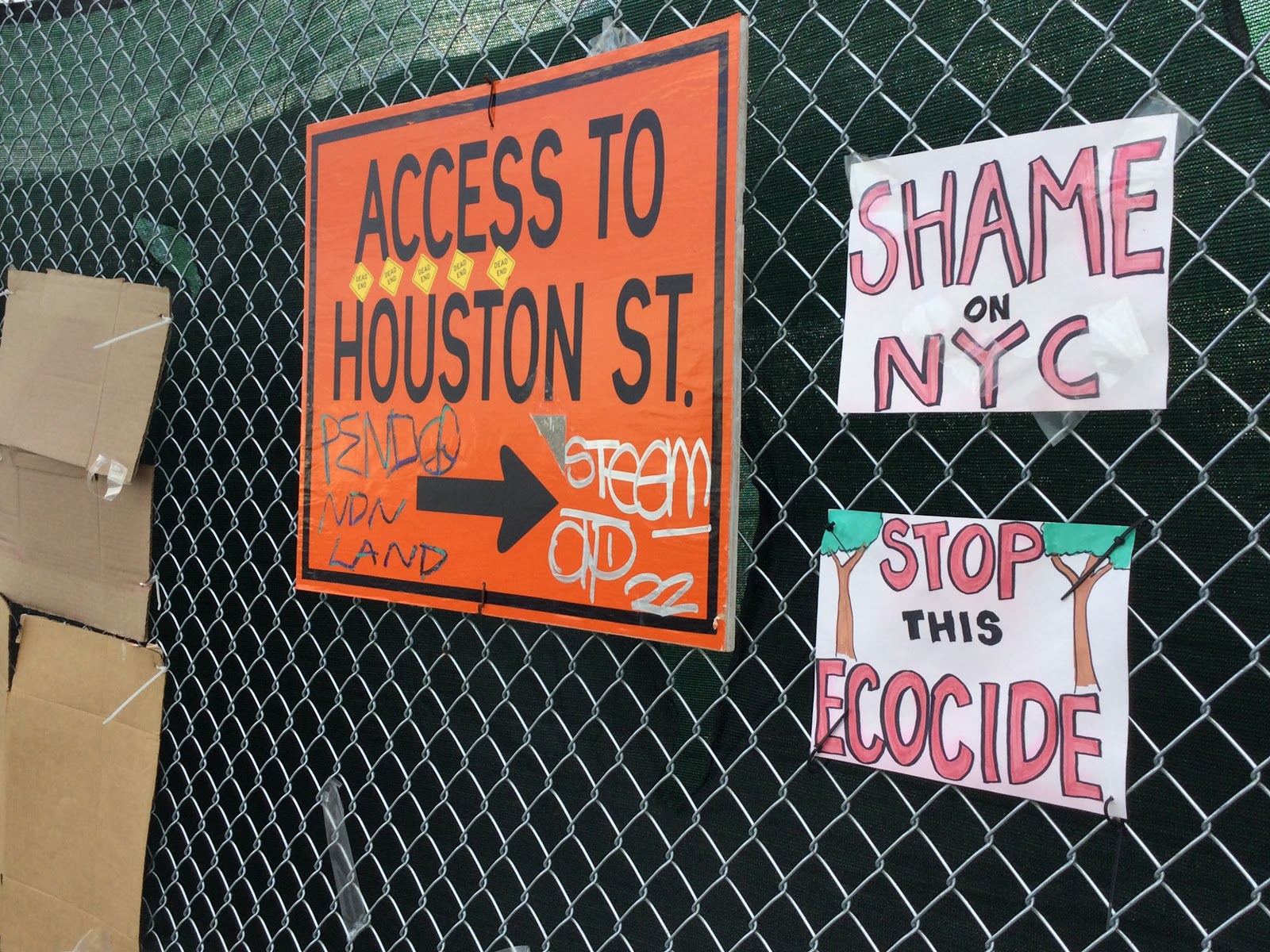 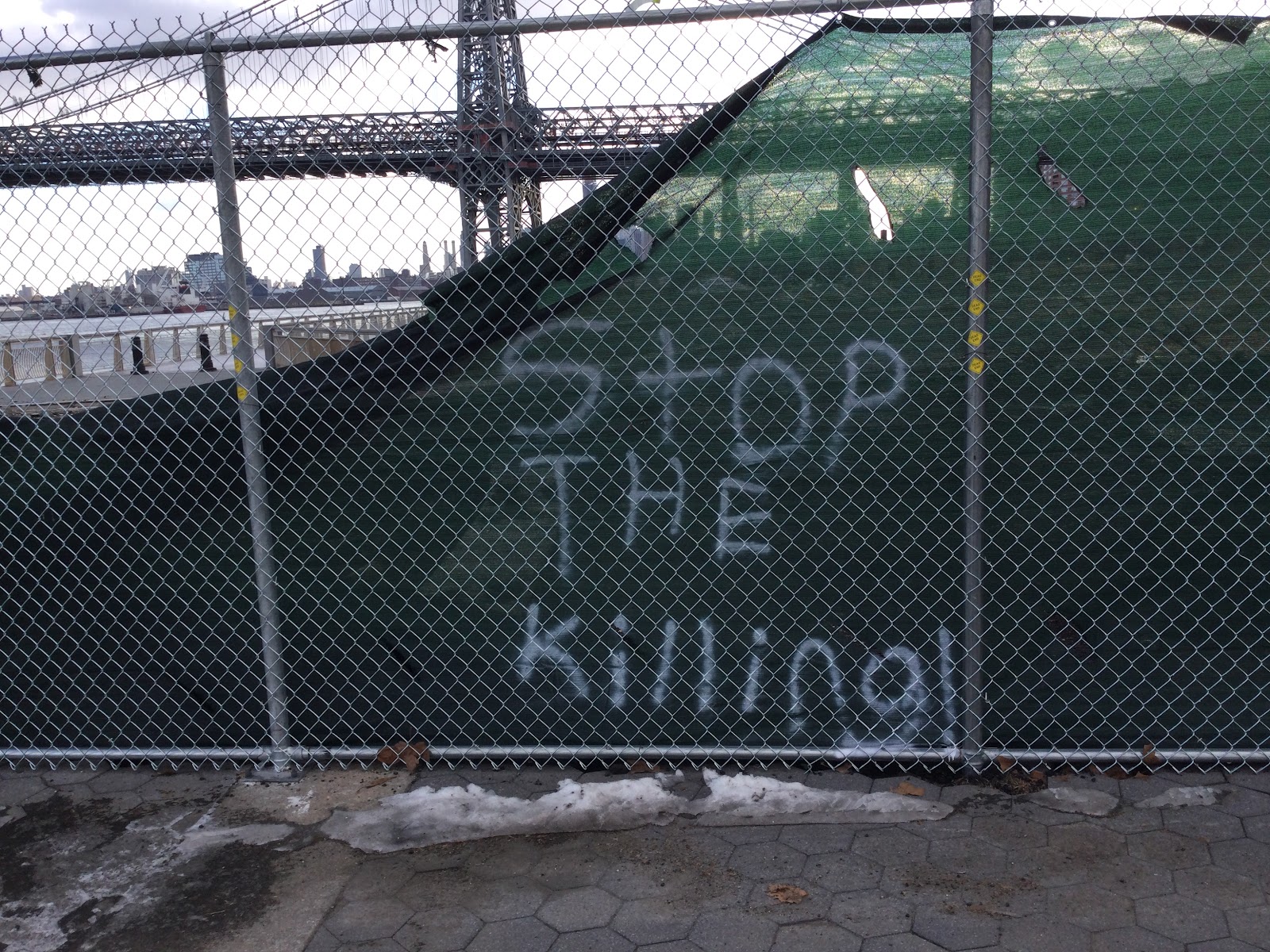 Posted by Sarah Sarai at 8:57 PM No comments: 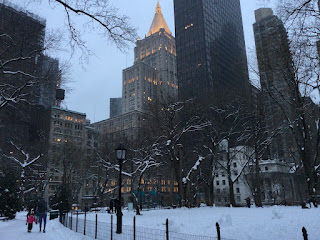 Madison Square Park, photo by Sarah Sarai
I am most unhappy with the first episode of "The Gilded Age," a Julian Fellowes-written jam which is very silly and very white. My HBO subscription ends in a few hours, so this was my farewell and no problem there.
This first-of-the-series episode is a fitting send off (to the demise of my subscription).  There were many complaints with HBO's The Wire - that it was a white writer's impression of a black city (Baltimore) and a black struggle (Baltimore). That is my perspective of "The Gilded Age" - that it is very very very white and remarkably uninventive in being so. Despite the one young black woman who is a struggling writer. Perhaps her struggle will be representative of the times but why bother representing those times? Why use the history of racism as an excuse to further racism?
And why such a pallid portrayal of the nouveau riche? Hallelujah and thank you, lord, two great and interesting actresses brightened the screen. Christine Baranski as an old school white lady richie rich. And, briefly so far, Audra McDonald as the mother of Baranski's new secretary. (There is no situation or script on God's earth that could not be bettered by Baranski and/or McDonald.)
The plot is pallid. Carrie Coon, an actress I dislike (her expressionless face creeps me out - has done so since Fargo [the t.v. show], is the striver in this series. A monied wife who has a house built on Fifth - across from Central Park - as her Cape Canaveral to launch herself into old New York society. Her architect is the great Stanford White but apparently his name means nothing to the first families of New York. New York has always had snobs spinning its social circles with a circus clown's panache. And, yes, snobs are delightful when they are Baranski aided by some of the mustachio twirling men in the series.
In the final scene of Episode 1, the Carrie Coon character, an arriviste, insists she's going to make the snobs of New York admire her or come to her parties. THAT's the issue? Sounds like a Father Knows Best episode with Kitten scrunching her 10-year-old face to reveal gumption. It would work better if Reese Witherspoon were the pushy broad determined to get through Harvard Law.
I live in NYC and it is mundo snob-o-licious. It is awful here, in fact, IF you harbor a desire to fit in. Which I stupidly did. Because there are no accommodations for weirdos like me (a simple country lass with no money and a quick tongue). I'll talk about that sometime when my thinking portions are up to par.
Posted by Sarah Sarai at 12:36 AM No comments: 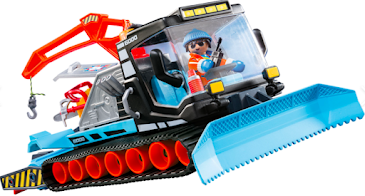 Last November, Vermont school kids got to name their local snowplow. Click below for the news story and below the below, read the names, i.e., William Scrape-speare, The Plowinator, Brr-ito, JFK Snow You Didn't, Darth Blader, Captain Snowpants

Posted by Sarah Sarai at 2:41 PM No comments: