A short-short story: The Really Deep and Proving Slobberoni Kiss 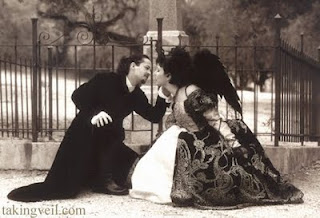 The day Uncle Otto motored me to the Gymnasium in time to make the bus for summer camp, Mama and Papa were wonked out on the floor of our chateau, sleeping off ten years of craftsman-like study of the arts of distillation.

“Little muffin nose.” Uncle tweaked my child-like proboscis, a tweak that would cause sinus blockage in my adult years—but who knew? We were young, granted I was ten and he was forty-five, but young-er than we are now. He cupped my quivering chin in his broad hand the size of the chunk of granite I perched on the next two weeks as I pondered the shadow which had fallen over my life. I felt, as one can feel in the mind’s memory, even then the big wet one he laid on me.

Yet that was it and I was chaste.

Several years later, after my sweet sixteen party at La Plazita, Grandpapa, that twinkle in his eye so like a firefly made of papier-mache doused with kerosene and lit aflame, joked, “Munchen, your education is incomplete, correct?” He leaned over to me, the faint blend of peppermint schnapps, Peppermint Patties, and Depends wending its way in my neo-womanly nostrils so ready to inhale adult scents.

“Little sesame seed,” he teased. My lips, eager to taste all that life has prepared on its half-price-after-9:00 p.m. banquet of delights, parted and felt a tongue wriggling its way in and around my teeth. This was, after all, Grandpapa, a man of experience and also, let’s not forget, a dentist with a nice practice on the upper east side of a small duchy the size of Uncle Otto’s hand. And yet that was that.

Even beloved though contrary, and, to some, dotty Aunt Bertholde, fresh from a lifetime of self-recrimination and badminton, had a go as we ascended the staircase at Vichy Sousa, and strolled towards our rooms, hers actually being in a hotel some meters away. She pressed me against the wall. “Ever tried this?” she lisped. Her hummingbird tongue tasted my gummy honey, darting here, there—yet not everywhere.

Finally, Dad, no longer deferring to sweet liqueurs, called me to his side. I had reached my maturity. Papa coughed several times; cleared his throat. “Kitten?”

“You know I’ve let your entire trust fund fall through my hands like chafe through a very large and open space?”

What is one to say?

“Well, you’re going to need something to fall back on.” He drew close as if to finish what others had begun. I pulled back. “Do you know what you’re doing?” He protested. “You could have one heck of an entry in that diary you’re always scribbling in.”

Night became day, and time became tide, and Tide became colorfast. As to Papa and I, the limits I draw around love may be petite and my ignorance of life not inconsiderable, but my memories are licensed and my estate in my lawyer’s dukes, with dark tufts of hair on each finger.

I wrote this in 1997 when Kathryn Harrison's memoir The Kiss created a bit of a scandal.
Posted by Sarah Sarai at 11:25 PM

Email ThisBlogThis!Share to TwitterShare to FacebookShare to Pinterest
Labels: Kathryn Harrison, The Kiss