I can't figure out why this poem hasn't made it into any of the big anthologies. Well, I accept a life of ignominy with my usual genial disillusion. Read and then tell me your life hasn't been changed by Sarah Sarai. And no, I am not posting it to fulfill my ongoing need for content. I don't think it has any.


For the Tide Being


I was adrift
5 billion years
& then I swept ashore

The sand was firm,
my legs were not,
upon the moundy beach

My cups were B,
I cleaved to earth:
o! sandy Mama Dear

___
Of for and by Sarah Sarai. Written in the previous century, but latish, like the 1998s.
...The delightful illustration is from the Cairo newspaper Al-Ahram Weekly and part of a series illuminating the fiction of Nagib Mahfouz (who won a Nobel in 1988).

Posted by Sarah Sarai at 1:42 PM No comments:

Email ThisBlogThis!Share to TwitterShare to FacebookShare to Pinterest
Labels: Cast Away, evolution, For the Tide Being, Gilligan's Island, Swept Away

About Queen Dido, you wonder,
if at some point early enough for
self-prevention she could have
hung up mythology for a safe
nakedness of, hey, herself, even
if judged (when the world sees you
as you were born it confronts fear
of isolation and transformation,
and the world detests confrontation
unless it’s brutal and there’s victory
or a shield or rhymed manuscript
rendering titanic loss as fame).
Dido was Phoenician. I would like
to be Phoenician, say it with me,
Phoenician.  Don’t you like me
more, now?  Forgetting rapture in
the arms of an accomplished heart
or the quiet softness of a penis
sighing, Aeneas sailed his cock
to Rome, leaving her in Carthage,
the city of her breasts stomach
hips, configurations of the universe.
Dido.  Were his promises to be
believed, really.  You can still
tell him no.  And it’s going to be
a while before translations of war
and abandonment no longer make
sense.  In your lovely city you can
weep.  Yours, you built it, weep.
_____
Sarah Sarai, published in Gargoyle 57, 2011, edited by Richard Peabody.

I know a poet who lives in one of the many Phoenicas; a lucky Phoenician.

Poem: "On Being Criticized for Identifying Ishmael Reed as a MacArthur Fellow"

On Being Criticized for Identifying Ishmael Reed as a MacArthur Fellow

Writer, public intellectual, media commentator, Berkeley professor, recipient of a MacArthur Fellowship, father, and 75-year-old man-of-color, Ishmael Reed was hassled by three clerks today at a Walgreens on Shattuck. He was shopping for a bargain pack of bottled water.

Taking a break from hiding out from the Nazis in an attic with his family in Holland, teenaged girl Ishmael Reed was harassed today by three clerks at a Walgreens in Berkeley. As he noted in his famous diary, it was a hot day in July and he was shopping for bottled water.

Long known as Walt Disney’s favorite Mouseketeer, buxom Ishmael Reed, who died earlier this year from complications of MS, was targeted today by three clerks at Walgreens. He was thirsty and looking to buy a bottle of water.

Hunted across the seas by the bookish Captain Ahab of New England, large white whale Ishmael Reed was profiled by three clerks at a Walgreens in Berkeley. It was July, the Pacific was hot, and he had tired of salt water.

Holding a bag of Skittles and a cell phone, and wearing a gray hooded sweatshirt, 17-year old Ishmael Reed was challenged today by three clerks at a Walgreens in Berkeley.  Mr. Reed was shot dead by George Zimmerman on the night of February 26, 2012, in Sanford, Florida.  He had set out to buy a bottle of water.

I was questioned by a friend (a good friend, whose outrage I am spinning off) when I identified Reed as a MacArthur Fellow, and, yes, some of my outrage came from that, and his age, and his Ishmael Reedness. Last Sunday night when I was demonstrating at Union Square my outrage came from, in part, the fact that Trayvon Martin was a silly kid with a bag of Skittles.  We're defined by how we present but that doesn't make the circumstances enacted on us worse or better, or not entirely.

I didn't post this poem when I wrote it because I am not sure it should see the light of day.  But here I go, foolhardy as always.

The astonishing artwork is from http://www.comicvine.com/moby-dick/4005-65442/images/. Chris Doom is the artist.

I'll be reading with Sapphire & 6 other poets this Sunday at t.d.b. bar in Brooklyn in an Other Rooms Press extravaganza get the details H-e=Er & this poem is a blatant lure a siren call without any rocks to crash on except the ice cubes in your glass.  Sunday, 7/21. 1-3 pm. Here's a poem by the astonishing Sapphire.

It is like a scene in a play.
His bald spot shines upward between dark tufts of hair.
We are sitting in a pool of light on the plastic
covered couch, Ernestine, his last live-in,
ended up with. But that is the end.

We are sitting in the beginning of our lives now
looking at our father upright in his black
reclining chair. It's four of us then, children,
new to Los Angeles--drugs, sex, Watts burning,
Aretha, Michael Jackson, the murder of King,
haven't happened yet.

Two thousand miles away in the yellow
linoleum light of her kitchen, my mother
is sitting in the easy tan-colored man's lap.
Kissing him. Her perfect legs golden like
whiskey, his white shirt rolled up arms
that surround her like the smell of cake baking.

"Forget about her," my father's voice drops like
a curtain, "she doesn't want you. She never did."

Holding the photograph by its serrated edges, staring,
I know the dark grey of her lips is "Jubilee Red"
her face brown silk. I start with the slick
corner of the photograph, put it in my mouth like it's
pizza or something. I close my eyes, chew, swallow.

___
From Black Wings & Blind Angels by Sapphire. Copyright © 1999 by Sapphire. Excerpted by permission of Knopf, a division of Random House, Inc. All rights reserved. No part of this excerpt may be reproduced or reprinted without permission in writing from the publisher And yet here I've reproduced it. I will apologize to Sapphire on Sunday.

*info on hoodie ...which I found googling kharma...at Rebels Market
Posted by Sarah Sarai at 12:02 PM No comments:

Email ThisBlogThis!Share to TwitterShare to FacebookShare to Pinterest
Labels: Other Rooms Press, Sapphire

I Won't Say It Isn't Easy to Hate. Our Million Good Wishes for Trayvon Martin.

I won't say it isn't easy to hate. I won't say that hatred is not some part of the evolutionary playbook, because it is there, here,  making itself available.

I won't say the "fuck you George Zimmerman" and similar I have heard over the past twelve hours aren't a lot more real and comforting than the less felt, more intellectual explanations I've balked at, explanations of Florida or racism in American.

And I won't say we need any more lessons about racism and hatred.  I sure won't say that the point-blank homicidal shooting of Trayvon Martin by George Zimmerman was anything other than the Klan in a not-so-new guise, in action.

I won't say I got all the comfort I need today when I went to church BECAUSE of the verdict, because I needed help.

I won't say I don't worry for every Black teenage boy, every Black man, every male-of-color in the United States, because I do and I see no end to the reasons for my concern.

I won't say that in a week when I'm having fun with friends or reading a book at a park or grumbling about how I loath working, I will not have moved on in my life. I'm alive.

But I do know I won't forget. After Katrina my niece said, "Well, and now everyone is going to forget."  I knew she was wrong but that she wouldn't hear it from me. People haven't forgotten. The government abandoned abandons and will abandon but New Orleans and Katrina? Remembered.

I've given up my interpretive belief in an afterlife. As an artist I used the solace of metaphor and image. We might be lucky to meld with a star, be bright and unconscious, but that's it.

Are You Tired of Hanging Out with the High-minded & Moral? Then Come to the Other Rooms Reading, 7/21..STARRING Sapphire! 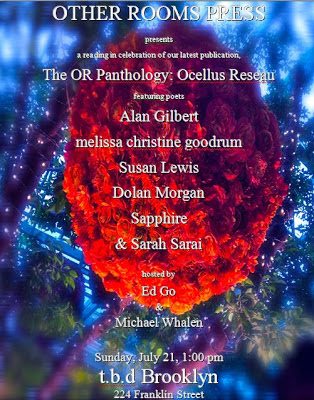 Many apologies to the great Sapphire, poet and genius and moralist and probably the most fun of the lot. Certainly the prettiest.

Them's what I had in mind when writing that title are the two Other Rooms Press instigators, Ed Go and Mike Whalen. Indeed I suspect they left me as the last reader because they figured I'd be so wearied by that point, in the afternoon, I'd buy them a drink. Nice try.

Melissa Christine Goodrum is the editor of The Or Panthology: Ocellus Reseau, which this reading celebrates. We like her. Please join us, SUNDAY, July 21, at t.b.d. bar, 224 Franklin Street in Greenpoint, Brooklyn.
Posted by Sarah Sarai at 1:23 PM No comments: Hoorah for recycling and hoorah-with-a-bullet for the continued attention paid to recycling by the New York City Department of Sanitation. But someone in the department's Central Correspondence Unit needs to hire a proofreader.

Yesterday I received a mailer detailing expanded criteria for types of PLASTICS. Also, PAPER. It can be ripped from a can and recycled (we are reminded). Hoorah and no argument with that.

But the mailer, sent to each and every 8 MILLION GIVE-OR-TAKE of us was printed as being "First-Class Mail." It wasn't first-class mail. Someone in the department must have noticed, and god knows just who had to manually cross out, with a marker, that portion on each mailer.

How long did it take to cross out 8 million "First Class Mail"s? I thought it was funny, not a hugely costly gaffe, just a gaffe under the watchful eye of Bloomberg who spends so much time instructing the police to stop and frisk, especially to stop and frisk nonwhites. He wasn't aware of his schnoz or that which was under it.

I like to imagine pizzas brought in and disgruntled teenager, children of city workers. I like to imagine a weekend devoted to correcting the mistake, having to send out a team to find an all-night Staples for more markers, someone paying for them himself.

HIRE A COPYEDITOR. If you can't find a good one, who is "thoughtful" (to quote an art director talking about my work), be aware I am here, at your service. No pizza required. (It's hard to proofread yourself, by the way. I know.)
Posted by Sarah Sarai at 10:43 AM No comments:

David Clark has been creating witty AND PROBING electronic artsophy (Sarah Sarai's TERM--I coin it) for a good, if not very good, while. I posted a link to his 2010 88 Constellations for Wittgenstein (to be played with the left hand) here on My 3,000 Loving Arms (they're quite loving, trust me) (veering on rapturous).

Sign After the X is one of his earliest works: Mind, Body, Language (a Ouija Planchette), Land (a Monopoly board-I'd like to put a few houses on "Citizen Kane" with its "false displaced center" of Rosebud), Law.  None of this will make sense unless you click and explore. Or will it.

I found Sign After the X on 88constellations.net/blog. More electronic artsophy, notices, links.

Who loves ya, baby? Join the dots.
Posted by Sarah Sarai at 11:53 AM No comments: